This is the long isoform of Neat1. 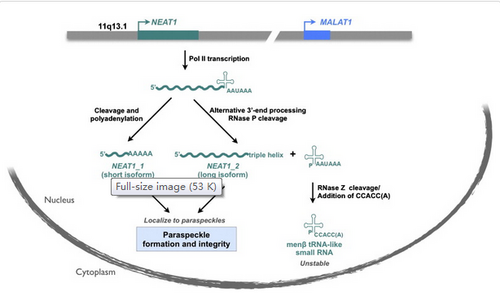 Single exon transcript,long isoform is a continuation of the short isoform[4].

These two isoforms share the same transcriptional start site, but their 3′ ends are processed by distinct mechanisms: canonical polyadenylation or RNase P cleavage.Intergenic[6].

The two Neat1 isoforms also have differing stability, with the long (v2/Men beta) isoform more stable than than the shorter (v1/Men epsilon) isoform in N2A and 3T3 cells[7]. NEAT1 was exclusively localized in the nuclei of the villous trophoblasts and was expressed in more nuclei and with greater intensity in IUGR placentas than in CTRLs. PSPC1, one of the three main proteins of the paraspeckle, co-localized with NEAT1 in the villous trophoblasts. The expression of NEAT1_2 mRNA, the long isoform of NEAT1, was only modestly increased in IUGR vs. CTRL placentas[8].

A conserved tRNA like sequence at the 3' end is cleaved off and processed to generate a short tRNA-like ncRNA from the long (Men beta) transcript, similar to Malat1[5]. The last ~500bp of the short (Men epsilon) isoform has been shown to be expressed in trophoblast cells with a function potentially independent from the Neat1 transcript.

NEAT1_2 is processed by RNase P with a similar mechanism to that of MALAT1 ,RNase P cleavage leads to the formation of a mature 3′ end of NEAT1_2 , which is protected by a triple helical structure[1].

Transcription of Neat1 is essential for the assembly, maintenance and structural integrity of paraspeckles[9][10][5][11][6]. p53 has been found to induce formation of Neat1-containing paraspeckles and modulate replication stress response and chemosensitivity, which makes Neat1 a promising target in cancer therapy[6].

In vivo however, significant expression of Neat1 v2 appears to be required for cells to form more than 1 or 2 paraspeckles[13]. Neat1 appears to constrain the size and mediate the cylindrical geometry of paraspeckles.

Neat1 short and the identical 5' end of Neat1 long plus the 3' of Neat1 long all localise to the periphery of paraspeckles, while the central region of Neat1 long is found in the interior of the nuclear body[14]. Interacts with paraspeckles proteins PSPC1, PSF/SFPQ and NONO/P54NRB either directly or in a complex[9][10][5]. Interaction of short isoform with p54 requires protein interaction regions near the 5' and 3' of the transcript[15]. Neat1 knockout lead to loss of paraspeckles, however mice were viable and fertile with normal morphology and populations of differentiated cells in one Neat1 v1 and v2 expressing tissue tested[13]. 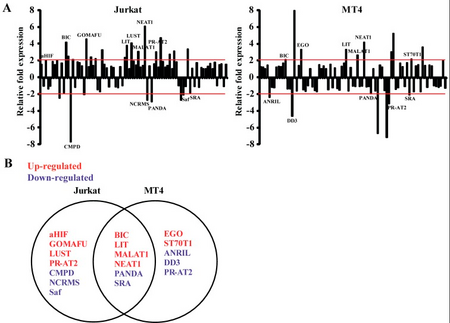 Expressed in a wide range of human and mouse tissues[17][3][4][5]. Although expression of the long isoform (Neat1 v2/ Men beta) is much lower than Neat1 v1/ Men epsilon in many tissues[13]. Up-regulation of Neat1 (and subsequent formation of/increase in paraspeckles) may be a general feature of differentiation. Neat1 is up-regulated upon human ESC differentiation[14], muscle differentiation[5]and in-vitro neuronal differentiation[18]. Up-regulated upon infection of mice with Japanese encephalitis virus or Rabies virus[3]. Expressed in the nucleus accumbens of normal human brains and upregulated in this brain region in heroin abusers[19]. In addition, expression levels are elevated in the caudate nucleus of patients suffering from the neurodegenerative condition, Huntington's disease[20]. Localised to paraspeckles within the nucleus[4][5]. Mouse Neat1 found to be highly unstable (half-life <2 hr) in N2A (neuroblastoma) and 3T3 cells, although low stability did not prevent paraspeckle formation[21][7], while human NEAT1 appears to be more stable[10][5][21].

NEAT1 is one of several lncRNAs whose expression is changed by HIV-1 infection[16].

The expression level of NEAT1_1 and NEAT1_2 is likely controlled by HNRNPK, which is a newly identified paraspeckle protein and interferes with the CFIm complex cleavage to keep NEAT1_2 synthesis low[1].

Placental mammals. Dog Neat1 is found in several genomic locations, version that is found near single dog Malat1 gene is given below[4].

FUS (Fused in sarcoma (FUS) protein, linked to a number of neurodegenerative disorders, is an essential paraspeckle component, and paraspeckles are nuclear bodies formed by a set of specialized proteins assembled on NEAT1) regulates NEAT1 levels[22].

p53 has been found to induce formation of Neat1-containing paraspeckles[6].

Neat1 has also been reported to interact with a number of chromatin binding protein/complexes in mouse embryonic stem cells including PRC1, PRC2, JARID1B, ESET and SUV39H1, with the general pattern being interaction with repressors of gene expression[23].