HULC : Highly upregulated in liver cancer RNA is characterized as a novel mRNA-like ncRNA which is associated with cancer progression. [1] 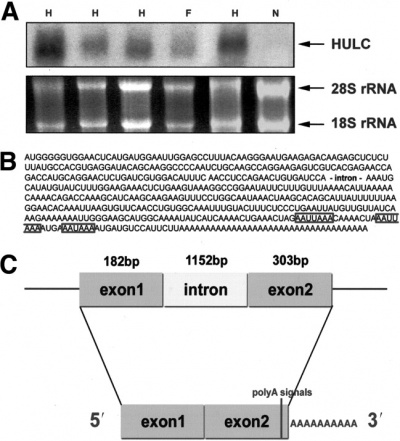 Characterization of the HULC transcriptional unit. (A) Northern blot analysis of HULC RNA. Ten micrograms of total RNA were loaded per lane. A positive signal at 500 nt indicates specific overexpression in different tumorous tissues. H, HCC; F, focal nodular hyperplasia (FNH); N, non-neoplastic liver. 18S and 28S rRNA were used as a control for the quantity and quality of RNA loaded. (B) The HULC gene locus. HULC RNA sequence including the polyA tail showing the location of the intron and the polyadenylation signals (boxes). (C) Diagram of the HULC gene locus. The HULC gene consists of 2 exons, 182 nt and 303 nt long, with 1 standard AATAAA and 2 noncanonical AATTAA polyadenylation signals occurring 21 nt, 32 nt, and 47 nt, respectively, upstream from the polyA tail. [1].

HULC RNA is ~500nuc, spliced and polyadenlyated,localized on human chromosome 6p24.3 and resembles the mammalian LTR transposon 1A. One striking feature of the HULC RNA sequence is the high density of stop codons in the small potential reading frames scattered throughout the HULC gene. It does not contain substantial open reading frames, and no protein product was detected. HULC is present in the cytoplasm, where it copurifies with ribosomes. The HULC gene includes a single intron and carries 1 canonical and 2 noncanonical polyadenylation signals 21 nt, 32 nt, and 47 nt, respectively, upstream from the polyA tail [1]

HULC has a role in post-transcriptional modulation of gene expression. First clues about the function of HULC were obtained from siRNA-mediated knockdown of HULC in Hep3B and HepG2 cells, which resulted in a significant up- and down-regulation of several genes. [1] HULC may act as an endogenous ‘sponge’, which down-regulates a series of microRNAs (miRNAs) activities, including miR-372. Inhibition of miR-372 leads to reducing translational repression of its target gene, PRKACB, which in turn induces phosphorylation of CREB. [2]

PKA pathway may involved in up-regulation of HULC. [2]

HULC Is specifically expressed in Hepatocytes and highly up-regulated in HCC. HULC is the first ncRNA with highly specific up-regulation in HCC. It was detected in blood of HCC patients therefore can be used as a potential biomarker. In contrast to the liver tumors, HULC is only slightly up-regulated in cirrhotic liver tissue and only barely detectable in most of the normal tissues. In situ hybridization revealed the specific and strong expression of HULC RNA in the cytoplasm of HCC, whereas it was not detected in tumor stroma and non-neoplastic liver cells. [1]

HULC was overexpressed in colorectal carcinomas that metastasize to the liver indicating that HULC expression is not confined to HCC. [3]

HLUC also present in other primates, gene shows good conservation above that of surrounding sequence. Not detected in rodents so may be primate specific [1]