LncRNAs (Long non-coding RNAs) are closely associated with human health and diseases. While the human genome transcribes hundreds of thousands of lncRNAs, only a small part of them have been experimentally studied. The comprehensive annotation of human lncRNAs is of great significance in navigating the functional landscape of the human genome and deepening the understanding of the multi-featured RNA world.

To facilitate the discovery of lncRNAs’ biological functions, we developed LncBook, which is devoted to the integration and multi-omics annotation of human lncRNAs. It provides a comprehensive and high-quality list of human lncRNAs, enriches these lncRNAs with essential multi-omics signatures, and identifies featured lncRNAs in diseases and diverse biological contexts.

The first version was published in the NAR 2019 Database Issue. Over the past several years, we have significantly updated, expanded and enriched LncBook. The updated version of LncBook 2.0 integrates more human lncRNAs, characterizes diverse molecular signatures of these lncRNAs with more abundant data and stringent criteria, and identifies a list of high-confidence lncRNAs that are most likely related with human health and diseases.

Compared with the first version, LncBook 2.0 has significant changes and improvements as follows:

Similar to the first version, we remove transcripts with redundancy, background noise and mapping error, as well as incomplete transcripts, short ones, and those that may encode proteins.

To improve the curation quality, LncBook 2.0 removes lncRNA transcripts without strand information, and transcripts identified as miRNA precursors, small RNAs and pseudogenes according to the comparison results generated with GffCompare.

In addition, four algorithms, viz., CPC2, LGC, CPAT and PLEK, are used for coding potential estimation, and transcripts identified as lncRNAs by at least three algorithms are retained.

However, the high-confidence lncRNAs annotated by HGNC and GENCODE are retained regardless of the coding potential.

The new version of LncBook focuses on lncRNA genes rather than transcripts. Following the strategies used by GENCODE and NONCODE, we assign lncRNA transcripts overlapped in their exonic regions in the same strand into the same gene. Accordingly, all transcripts and annotations are organized by lncRNA genes. 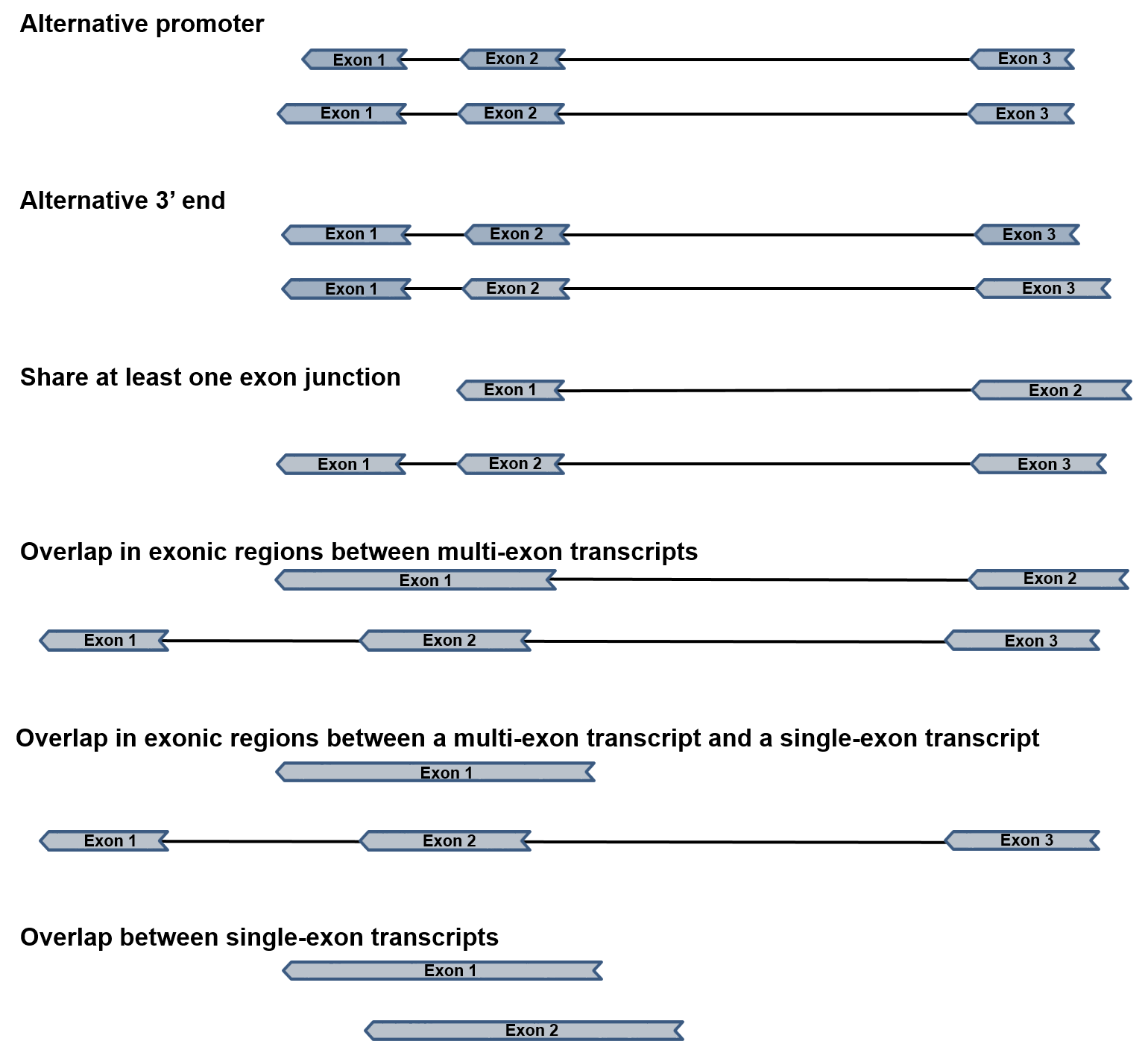 Based on the UCSC genome alignments between human and 40 vertebrates, we identify homologous protein-coding/non-coding genes and determine gene age for human lncRNA genes.

Alignment length is the total length of all alignments of the best-aligned transcript.

Alignment identity is calculated as the weighted average by length and identity for all alignments of the best-aligned transcript.

For example, in the comparison between human and mouse, mRNA exons are more conserved than lncRNA exons, and lncRNA introns are the least conserved. Among all the lncRNA genes, TUG1 and MALAT1 are highly conserved, whose alignment performances have exceeded the introns' Q99.5 threshold. 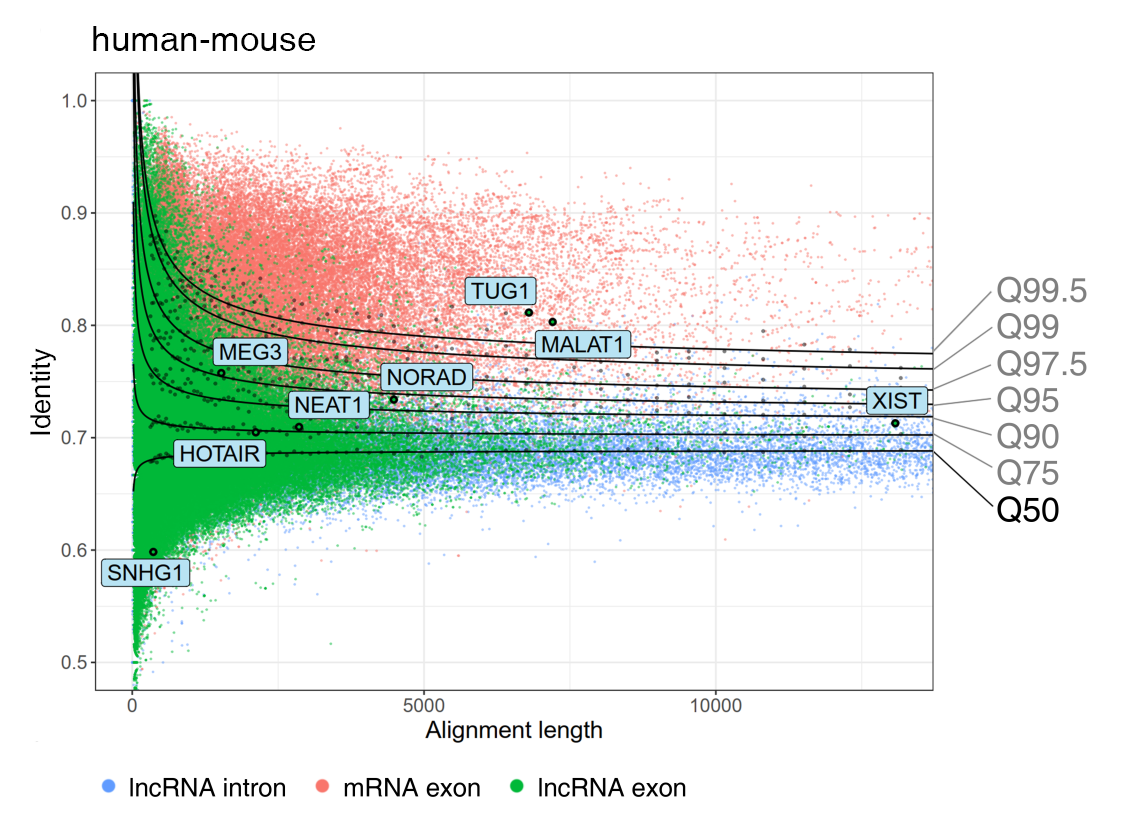 We collect variants from COSMIC, ClinVar and GWAS Catalog, identify disease/trait-associated variants, annotate corresponding disease/trait information and map them to the lncRNA loci.

We curate high-quality variants from COSMIC, ClinVar and GWAS Catalog.

Suggested by COSMIC, the variants whose FATHMM-MKL scores > 0.7 are defined as disease-related (pathogenic) variants. Variants with definite labels such as "benign" or "pathogenic" in Clinvar are collected. For GWAS Catalog, we collected associations with p-value (< 5x10-8), which has been widely used to determine associations between a common genetic variant and a trait of interest.

Names of diseases and traits are unified based on Human Phenotype Ontology and Experimental Factor Ontology, respectively.

Here, we define the regions from −1500 bps relative to the transcription start site as the promoter region and calculate the averaged methylation level of all CpGs in promoter or body region.

Differentially methylated lncRNAs (featured lncRNA genes) are identified by considering the significance of fold change, p-value, the maximum and minimum values. Considering the small sampling size of some datasets, different criteria are used.

According to these strict criteria, we identify a total of 19,543 featured lncRNA genes for DNA methylation (hyper/hypomethylated in promoter or body region).

LncRNA genes which are specifically/consistently/differentially/dynamically/periodically expressed in at least on biological context are defined as featured genes.

Accordingly, for each context, the expression capacities are displayed with different colors, and featured genes are represented with the shape of five pointed star in the table of "Expression" section.

Small proteins supported by Ribo-seq and mass spectrometry evidence are integrated from SmProt. We map small proteins onto the lncRNAs with BEDtools and those entirely and uniquely fall within lncRNA transcripts are retained. Totally, we integrate 34,012 lncRNA-encoded small proteins for 5,743 lncRNA genes.

Based on the collection of 848,077 RBP (RNA Binding Protein) binding sites of 150 RBPs in HepG2 and K562 cell lines from ENCODE, we map the RBP binding sites onto the lncRNAs with BEDtools and those entirely and uniquely falling within lncRNA transcripts are retained. Totally, we obtain 772,745 lncRNA-Protein interactions for 2,022 lncRNAs.

The Conservation section provides conservation features of human lncRNA genes across 40 vertebrates, as well as alignment details in each species.

You can trace the original gene/sequence of a certain human lncRNA gene, obtain the homologous protein-coding/ncRNA genes in different species, and explore the most conserved or human-specific lncRNA genes.

You can search interest entries by gene ID, dbSNP ID, functional effect, disease name or trait and download these entries by clicking on download button.

The "Methylation" section provides all the hyper/hypomethylated lncRNA genes in promoter or body region in at least one disease.

You can explore the methylation status of your interest lncRNA gene across the 16 diseases, or obtain all differentially methylated lncRNA genes in a specific disease.

The "Expression" section provides all the lncRNA’s expression capacities in various biological contexts.

You can explore high-capacity lncRNAs in one or multiple contexts using the categories in the “Expression Filter”. All entries can be downloaded by click on download button.

Furthermore, the “Chart” enables visualization of expression level distribution among all the biological conditions. Clicking on gene id will direct you to the LncExpDB page where you could view the expression profiles across different biological contexts.

You can search interest entries by gene ID, small protein ID or experiment evidence and download these entries by clicking on download button.

The "LncRNA-miRNA interactions" provides the binding start, binding end, sequence complementarity score and the minimum free energy for the RNA duplexes. You can search interest interactions by gene ID, symbol or miRNA ID and download them by clicking on download button.

The "LncRNA-Protein interactions" provides basic information of the binding start, RBP and cell line. You can search interest interactions by gene ID, symbol, RBP or cell line and download them by clicking on download button.